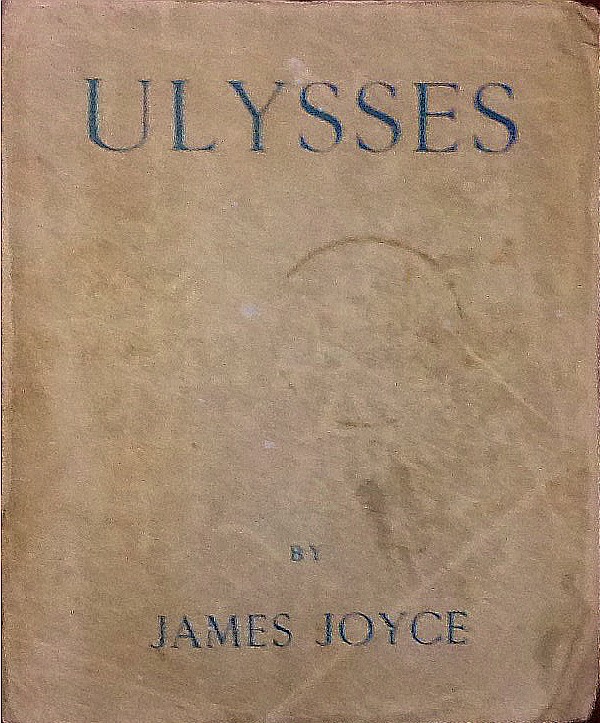 The buff-colored copy of Ulysses that lies on a table in the library at Steepletop is part of the sixth printing of the first edition, published in Paris in August of 1925 in soft covers by Sylvia Beach’s famed bookstore, Shakespeare & Company. Millay missed the chance to buy a copy of the first printing of Ulysses: she was in Paris in the spring of 1922, only a few weeks after Sylvia Beach placed the first two copies in Joyce’s hand on February 2, 1922, his fortieth birthday. But during that particular Paris trip Millay didn’t make much of an effort to connect with literary life, instead “doing the whole darned town, like a couple of flat-footed tourists, museums, churches, everything” with her mother Cora until their departure shortly afterward for England (Macdougall 152).

Excerpts from Ulysses had run from 1918 to 1920 in the Little Review, a literary journal published and sold from the Washington Square Book Shop at 17 West 8th Street, just a few intimate Village blocks away from where Millay was then living and making a splash at the Liberal Club and the Provincetown Playhouse on MacDougal Street. After the owners of the Washington Square Book Shop were convicted on obscenity charges for selling copies of the Little Review with the serialized Ulysses in them, the book was effectively banned in the United States, and to publish an American edition became impossible. It wasn’t until 1933 that Ulysses was legally allowed into the United States. Reports Paul Vanderham:

US and British Customs authorities regularly confiscated copies of Ulysses seized at ports and border crossings throughout those countries until the early 1930s. Furthermore, as late as 1928 the New York Society for the Suppression of Vice, led by John Sumner, raided the Gotham Book Mart and seized not only a smuggled copy of Ulysses but also forty copies of Paul Jordan Smith’s A Key to the ULYSSES of James Joyce. Sumner watched the Gotham Book Mart, the main purveyor of [the Modernist magazine] transition in New York, like a hawk. (58)

How, then, did the 1925 copy end up at Steepletop? The chances are good that it was purchased soon after it was printed: there were 2000 copies in the sixth printing (U of Buffalo section 65), and the seventh printing began only a few months later, in either October or December of 1925 (Slocum 25); it’s unlikely that a copy would have lain hidden and unpurchased for very long. Literary Americans were keen to read the notorious work, and they were usually able to get their hands on a smuggled copy about as easily as they could get their hands on smuggled whiskey during those days of Prohibition. The ban on Ulysses was lifted in the same December week of 1933 that the ban on booze ended, as it turned out.

By the summer of 1925, Millay had married Eugen Boissevain and moved with him upstate to Steepletop. That fall, as Millay’s health deteriorated, they closed up the recently renovated farm and came down to the city so that Millay could visit various doctors. While there, they could easily have found an under-the-counter copy of Ulysses at any of several stores: Frank Shay’s tiny “stall” at 4 Christopher Street (in 1920 he had published Millay’s first book A Few Figs from Thistles), the Washington Square Book Shop where all the fuss began, the Gotham Book Mart in midtown Manhattan, the feminist and progressive Sunwise Turn bookstore in the Yale Club building right next to Grand Central Station on Vanderbilt. The Sunwise Turn had certainly been smuggled six de luxe copies of Ulysses in 1922 (Beach 99, Birmingham 230), and by 1925 might still have been stocking whatever copies of the work they could get. The Steepletop Ulysses might also have been sent or brought directly from France, escaping the clutch of authority: Millay and Boissevain both had many friends who might have sent it, including Max Eastman, who lived in Europe from 1924 to 1927.

Millay didn't sign the 1927 published letter objecting to a pirated version of Ulysses (Ellmann 151-2), and there is no published record of her having submitted an opinion on the book's quality (as many literary figures did) during its famous trial in the early 1930s. Whether she read the book, skimmed it, or never looked at it, its presence at Steepletop is a fact of decided interest.